TORRINO AND THE SUNDIALS

XVII Secolo
Go to the Descriprion 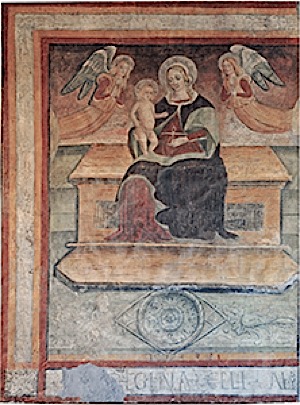 In 1541 Niccolò Ridolfi decided the construction of a square tower, locally called “the Torrino”, in order to protect the gate of the village.

TORRINO AND THE SUNDIALS

THE HISTORY OF “THE LITTLE TOWER”

In 1541, Florentine Nicolò Ridolfi, who was the nephew of Pope Leo X, cardinal and  bishop of Viterbo, launched a series of work for the urban reorganization of the town of Bagnaia in relevance to the revenue of the Bishop of Viterbo. Among these works is the construction of a square tower for the protection of the gate. The tower, still in good shape, stands next to the gate of the borgo, and it is called “the little tower” by the locals. Thanks to the Guild of the Peasants, in 1635, the inside of the tower, where the gatekeeper of the city used to live, were enlarged, giving a sacristy to the Church of Madonna della Porta. It was probably in this period that the little belfry was constructed on top of the tower. We can still see the small bell in its original place, built by Giovanni Belli much later in 1726 with the inscription “AVE MARIA GRATIA PLENA. IOVAN. BELLI F. A.D. MDCCXXVI.” In recent times, the tower was dismembered into many small private allocations for all of its elevation, except for the ground level where still live the locals of the sacristy of the church.

The positioning of the tower in the Piazza XX Settembre at Bagnaia created perfect conditions for the construction of two sundials. The wall of the tower ended up facing south, an ideal position for the illumination of the sun. Taking a closer look at the tower, situated at latitude 42° 9’ and longitude 12°  9’ E, the particular presence of the two sundials painted on the wall becomes obvious. The sundials measure the solar time for the people. They can be seen in the Bible, but in the territory of Viterbo, from the 17th to 19th century, they became precious decorative elements on the walls of public buildings or of patrician villas. According to Mario Catamo from the Italian Union of Amateur Astronomers, the construction period of the first sundial at Bagnaia is considered to be the beginning of the 17th century. The other one is of the following era of the 19th century. In a climate of urban relaunch, constructing a solar clock visible for everyone could well satisfy the needs of the life of the citizens, which is also consistent with the artistic and scenographic trend of the times. In order to find a direct document on the sundials, it is necessary to go back to the 19th century. The first certain records on the presence of the sundials at Bagnaia dates back to 1855, and in the town’s business acquisition of that year we can find the payment of 8 scudi (ancient currency), from the comune of Bagnaia to the Viterbo painter Omobono Viali “for two solar clocks in the public piazza.” In a painting of Bagnaia created by the Neapolitan painter Rubens Santoro, we can already see the clock and the sundials were placed side by side by each other. Around the mid-19th century, the new trends brought from France were imposed also to Bagnaia, when the italian system of the sundials were abandoned in order to adopt the French system. The second sundial was probably constructed in this period: smaller, and conceived with the new French trigonometric calculations. It was very likely that it caused confusion on how to read the new system that was not well known. At Bagnaia, like in many other parts of the country, in order to fix this confusion, it was preferred to just leave both sundials in their original places. After this period of confusion between the two systems in use (Italian and French), following the Napoleon’s conquer, the return of the French timing system was established for the royal decree, and the tradition remained also after the transfer of Venice to Austria with the Treaty of Campo Formio. The system was also adopted definitely nationwide with the unity of Italy in 1861. Since then the sundials remained on the wall of the tower, exposed to the time and to the weather. In 2001, seeing the degrading conditions that the sundials go through, the Associazione Amici di Bagnaia Arte e Storia sponsored the restoration, subsidized by the Comune of Viterbo, the Sixth District, and the CARIVIT Foundation. The entire recovery operation saved the sundials from destined destruction.

Between the two present sundials on the Tower of Bagnaia, the larger one, on the right, is known as “in Italian hours” and more precisely “the bell tower sundial”. The measurement of the time is based on the hours left before the sunset. The hour 24 is the setting of the sun, and the life of the people was controlled by the quantity of light still existing. More precisely, the sundial of Bagnaia has a distinctive trait rarely seen in other normal sundials. It was controlled, upon the twilight, which is half an hour after the sunset, when the bell rings for the Ave Maria. The dial is drawn with the equinoctial line, the hour lines, and serial Arabic numbers painted in black on white background. A red-brown cornice marks the internal dial. The gnomon is of “orto style” or “false style”, perpendicular to the wall, 46 cm long, positioned in the center of the sundial. The 12 hour lines are labeled with numbers from 13 to 24. An important demarcation indicates the vertical sundial line, pointing towards the bottom and marked with the particular number 14: it indicates the culmination of the sun south of Bagnaia and also the “true noon”, which is the halfway point between the time when the sun just passes the sunrise, and the end of sunset. Its function was so important that its name was used popularly when designing all the sundials. The “knot or needle of gnomon” now refers to the solar line that goes from the gnomon to the opposite end. The equinoctial line, or projection of the celestial equator, is the half line that intersects the hour lines. This line crosses the shadow of the style on the two days of equinox, March 21st and September 23rd, and is accompanied by the zodiac sign of Libra. The equinoctial line is portrayed as horizontal, which indicates the sundial is facing exactly to the south. The demarcations (projections of the celestial orbit, that provide astronomic, geographic, and chronometric information), are labeled between the lines 13 and 14, and between the lines 14 and 15, with the symbol of the zodiac sign of Cancer (69). The hour lines 21, 22 and 23 show a duplication of the layout. The hour 24 is defined by a horizontal line placed up on the right. On the left of the horizontal line that marks 24, is the writing “NONE” to presumably complete the word “CAMPANONE”.

Description of the Sundial in French hours or beyond Alps

Between the two present sundials on the Tower of Bagnaia, the smaller one on the left is the one in French hours. In this sundial the hour 24 is set at midnight. All of the 24 hours have the real solar variable day as basis, and they are related to the local sundial, rather than the time zone (longitude 15° east GW) of later institution. The dial is drawn with hour lines and serial roman numbers painted in black on white background. A red-brown cornice marks the internal dial. The gnomon is of the polar type, which is typical of the French tradition and therefore popular in Italy after 1800. It is 23 cm long, and placed in the center of the sundial (the point where the style is attached to the wall). 12 hour lines are labeled with numbers from I to XII. The demarcation of the solar lines are marked from the sundial line that corresponds to XII (knot) to X and going left to the line VI. To the right of the knot, from the line I to the right ending at V.

Translation by Chenze Zhu, University of Iowa, enrolled in the USAC Viterbo program at Tuscia University.

THE WALLS AND THE TOWERS OF BAGNAIA
9 September 2021

TOWER OF THE BORGO OR OF THE CLOCK
9 September 2021